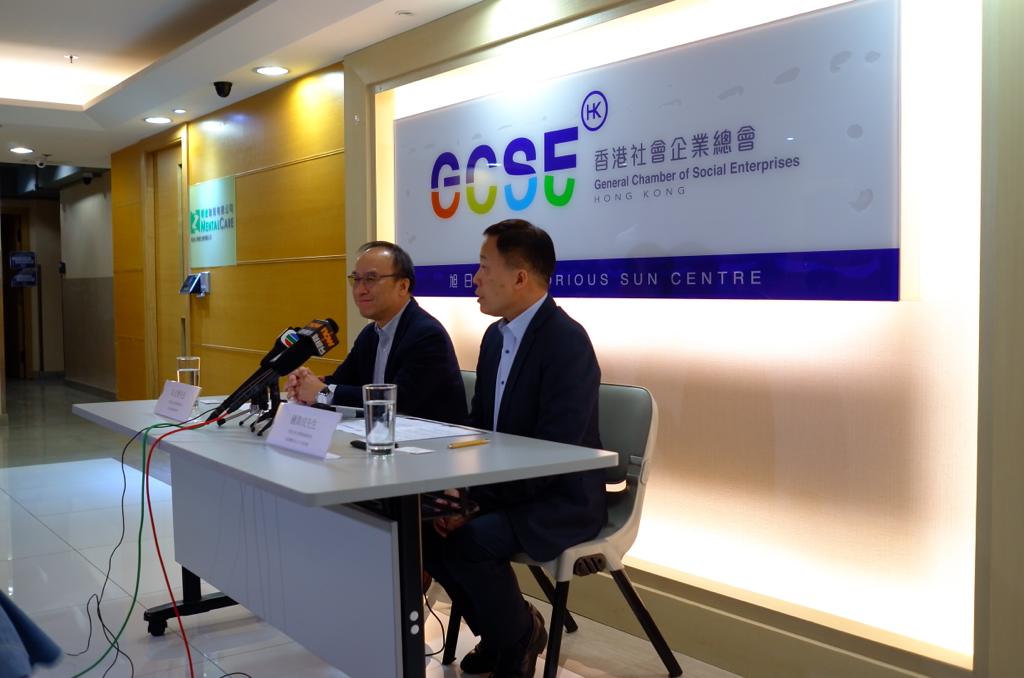 The press conference held by the HKGCSE on 2/12/2019 was hosted by the Chairman, Mr. Andy Ng and the external Vice Chairman, Mr. Chung Wai Shing. The survey results regarding the effects of recent economic and social conditions on the operations of social enterprises in Hong Kong were released at the conference.

The results of the survey we conducted in November showed that most social enterprises had negative views in the future business environment. The survey respondents included 103 social enterprises, which was around 40% of our members and 16% of all social enterprises in Hong Kong. The diversity of businesses of our responding social enterprises was large, including catering (30%), retail (35%), education and training (15%), healthcare and the service industry (20%).

Under the current political and economical environment, 80% of the social enterprises reported difficulty in operation. From June till now, nearly 80% of the social enterprises reported a deficit. The level of deficit was separated into three levels, severe (24.3%), moderate (42.7%) and slight (16.5%); the order of severity regarding the level of deficit was as follow: catering (100%), educational (85.7%), retail (78.4%). It was noteworthy that 90% of the enterprises felt extremely negative regarding the future business environment, with most of them in the retail and catering industry. Social enterprises had adopted different measures in dealing with the difficulties, with 80% of them slowing down the expansion of their businesses, 30% of them would downsize manpower, 20% of them would reduce the working time of their employees. If the current situation continues, only half of the enterprises could sustain their operation for at most one year, while 20% of them could only operate for fewer than three months. 60% of the enterprises stated their possibility of closing down was less than 20%, but over 10% of them stated that they had more than 50% possibility of closing down.

Below were some suggestions raised by the HKGCSE: